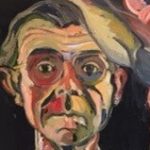 At his 10-year survey exhibition held at the Mornington Peninsula Art Centre in 1989, Br Patrick Henigan ofm was hailed in the introduction to catalogue as the ‘Don Robert of Australia’.  Don Robert, the celebrated Benedictine monk and painter, was seen as the conscience of the French Lurcat tapestry revival in the late 1940s: so Hennigan may be dubbed as the conscience of the new spirit that evolved in Australian drawing from the late 1970s.  His spiritual and artistic journey to gain this recognition, however, was hard fought.

Patrick Henigan (1925-2018) was born in Staffordshire, UK.  After working in coal mines and then in active service in the British Navy during WWII, he arrived in Australia in 1950.  Not long after he joined the Franciscan Order and, in 1954, professed his simple vows.  In 1971 in Brisbane, he had his first formal introduction to art and he was permitted by the Franciscan Order to attend the Brisbane College of Art in 1976.  Shortly after being moved to Melbourne, he enrolled at Prahran Technical College and successfully completed a full-time diploma of art in 1978 at the age of 53.  The course gave me the ability to see…, he told Margaret Jephson in an interview, and if you can see, you can draw (The Advocate, 4.9.1986).

After graduation, Br Patrick returned to work as a friar, drawing and painting initially in his own time.  At the easel, he drew portraits of himself.  He showed himself in anger, frustration, tension, fear, despair and joy, as a man searching for meaning and purpose.

I use paint, form, line to tell my opinion of what it is to be human …perhaps I should say I use paint, form, line to tell the world who I am and for me to see who I am …I try to let my work flow from my inner self: being concerned with spirituality, my humanness and its condition with God, guilt, anxiety, the need for reconciliation (Artist file notes, St Pascal Library, Melbourne).

In his paintings and drawings, he uses every line, dent and twist of the body to show his and human vulnerability.  Hands show humanity because humans make, do and build things with them, and eyes reveal the concern of the soul.  His powerfully expressive portraits led to solo exhibitions at the ‘avant-garde’ Pinacotheca Gallery and admiring reviews by art critics.

Following this critical acceptance (and temptation to leave the order and live the imagined bohemian life of an artist), Patrick Henigan started working on highly original responses to established Christian narratives.  In his powerful 1986 Prodigal Son series of drawings and prints shown at Niagara Galleries, he concentrated on the human form almost as much as the story through the representation of faces, figures and hands.  His images are far more than genre scenes with a moral content.  I’m the sort of person who doesn’t go for sweetness and light, for piety.  What I believe in, is something much darker, much more basic (Interview with Deborah Ratliff, Stations of the Cross Exhibition, Place Gallery, 2007).

His figures and characters are clearly mortal and their emotions human and personal.  Henigan poured his personal, emotive response to the prodigal son into works that embody his feelings.  I was talking about myself in the prodigal son coming back to the father after all these years of problems, he said in an interview with Anna Murdoch (The Age, 20.5.1989).   His Prodigal Son images from the St Paschal Library Collection therefore are memorable and enriching.

Hennigan’s highly original responses were also born of a self-depreciating awe for the lives of Christ and St Francis.  The Stations of the Cross was a series he drew many times.  The Stations of the Cross, depicting fourteen events in the Passion of Christ, began with St Francis as a form of devotion.  St Francis wanted to help the faithful make a spiritual pilgrimage of prayer through meditating upon the scenes of Christ’s suffering and death.  For Hennigan the drawing process was an extension of prayer.  In his Boxers Series (1988) from the St Paschal Library Collection, he imagines the Passion of Christ as a boxing match.  The protagonist is Christ, and he is going up once again to Calvary.  The fourteen strong images, black with emphasis, start in the dressing room (the last supper)… strengths and weaknesses are played out in the ring… and finally he is knocked out and carried out of the ring.  Hennigan’s visualisation of Christ’s passion and suffering is highly believable.

The Order of Friars Minor also hold a collection of Patrick Hennigan’s work.  Their hope is something of his legacy will be preserved in such a way that his life work does not disappear through neglect.  They believe his legacy is worth keeping alive and wonder if students of the future would be interested in knowing or writing about his work.  A catalogue of prints and other resource material is available for public viewing by appointment at St Paschal Library, Box Hill, Victoria.  Those interested in learning more about Br Patrick’s work should contact curator, Simon Gleeson (simon@ensemblefineart.com.au).

Simon Gleeson is the curator of the work of Br Patrick Henigan in the Franciscan collection at St Paschal Library, Box Hill, Victoria.