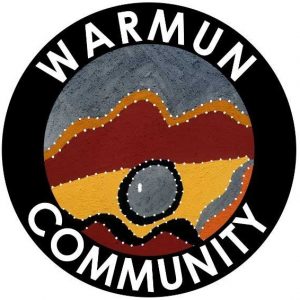 Queenie McKenzie and the Spirit of Mary MacKillop

Art in our churches is generally quite static.  The way art is used in aboriginal communities is often very different.  The Creation or Gospel story will be painted and then the work of art is used in the liturgy or in the classroom to proclaim the scriptures.  The artist holds the painting and tells the story as shown in the painting.  For this example we return to Warmun (see George Mung Mung, Mary of Warmun on this website).  We turn to one of Australia’s most well-known and respected aboriginal artists, Queenie McKenzie (c. 1915–1988).  This work was painted in 1994 at the time of Mary MacKillop’s beatification.

The people of Warmun emerged from a history of colonial violence, coercion and control to form an impoverished community at Turkey Creek (Eastern Kimberley) in the 1970s.  Through art, ceremony and song, the people kept and celebrated their language, stories and culture.  Catholic liturgy and belief also formed part of their story, shaping an integrated spirituality.

The community elders – including Queenie McKenzie– invited the Sisters of St Joseph to teach at the new ‘bough shed’ school which was established in 1979.  Education was a ‘two-way’ exchange: handing on indigenous tradition and opening up the Western curriculum.  Queenie’s paintings and those of other artist/elders were used to teach the children and figured at corroborees and the major liturgical feasts.  The school was named Ngalangangpum (Mother and Child) because the community received the Christmas story with particular delight. 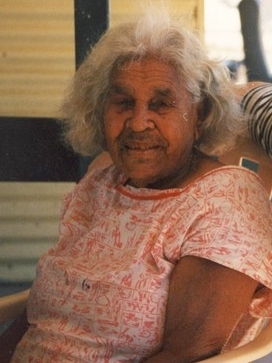 THE STORY IN QUEENIE’S WORDS

A big mob of us joined in and we talked like this: ‘Hey, how about we get a school here.  It’s no good taking kids down to Halls Creek.  Why can’t we get a little bit of a bough shed school?’  ‘Well, we’ll try’, we reckon, ‘we’ll try.’ …

We looked about and we found those two sisters: Sister Clare and Sister Theresa.  They were the first teachers.  Then Welfare asked us: What sort of a school do you fellas want?  We talked.  ‘We want a Catholic school; we’ve got to have sisters.  We don’t want other teachers’, we said.

All right, we find these two.  These twofella sisters; we were happy to get them.  We knew Father Bishop [Bishop Jobst] was fighting really hard for us.  After we got these two sisters in here, we had to get busy and build a bough shed for school.  Those twofella sisters had one caravan.  ‘Next time’, they reckon, ‘we’ll have to get one more caravan.’ … 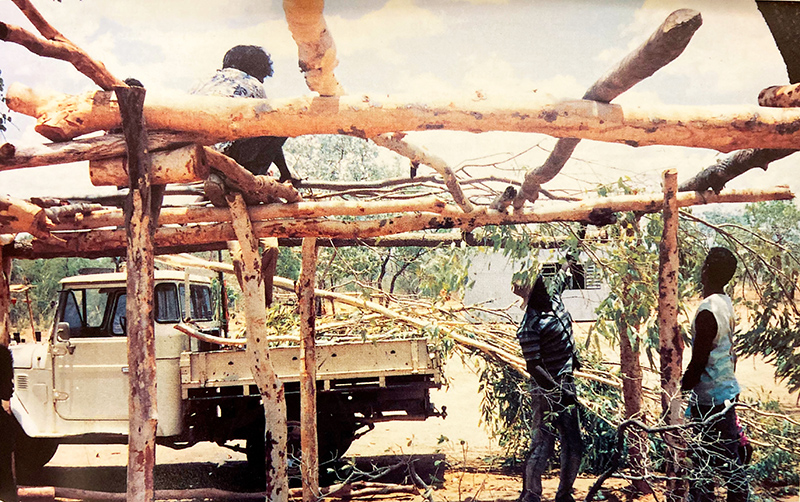 That first painting you see up there: that’s the way I teach these kids every morning.  I come to school and pray with them kids in their language.  I always do that first.  Talk to God and get them kids to talk to God.  Ask God to make them good.  That’s the way I do it.  That’s my job and I do it every morning.  I teach them culture way too.  This Ngalangangpum School, it’s a two-way school.  We can’t let kids forget their language and we help them know about Ngapuny [the Father].

THE SPIRIT OF MARY MACKILLOP

Two Josephite sisters, Clare Ahern and Teresa Morellini, began their classes under a tree in 1979 but soon moved into the simple bough shed when it was built.  They lived in a caravan on site.  Their approach involved respect and collaboration as they worked on learning the local Kija language.  They introduced art materials to the community and encouraged local artists to interpret and share their Catholic and Aboriginal spirituality through art. 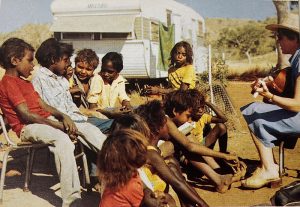 Below: Sr Theresa Morellini teaching at the Bough Shed 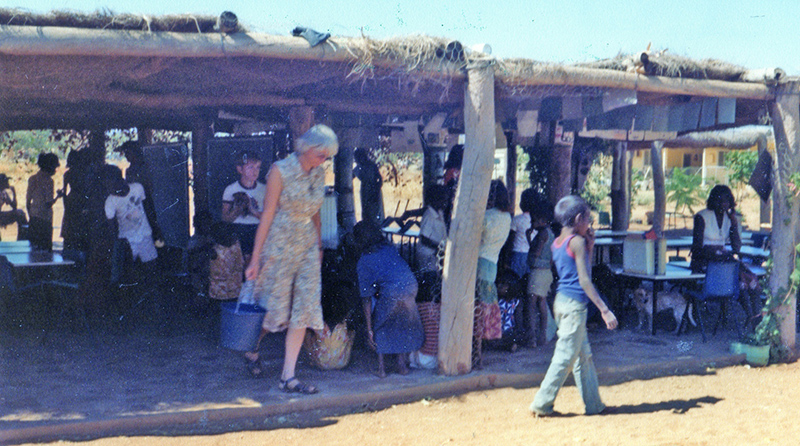 Queenie McKenzie was one of the first women elders to take up the brush.  In The Spirit of Mary MacKillop, she tells the extraordinary story of the sisters and Catholic education at Warmun over its first fifteen years.  She draws a parallel between Mary MacKillop who began teaching in Penola in a rough slab stable and the two sisters who began teaching in the bough shed just over a hundred years later.

The story told by the painting begins against the backdrop of the hills of the Bungle Bungles (top of the painting) where the mothers take their children to do bushcraft.  Then the story unfolds in a counter-clockwise direction.

At the top left, mothers and children are learning at the ‘first school’ under the tree.  At the bottom left, the two sisters are shown in their caravan.  In the centre, the sisters are teaching in the pink bough shed.  The black ablution block abuts the school at the bottom right.  Above, the little children are painted inside the preschool.  Finally in the top right corner, beside the hills, is the high school opened in the early 1990s.

TOM ELICH is Director of Liturgy Brisbane and chair of the National Liturgical Architecture and Art Council.