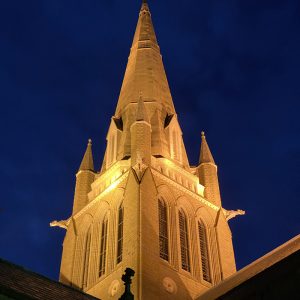 During two thousand years of Christianity, one of the more identifiable ‘archetypal’ forms of ecclesiastical architecture is that of the Gothic cathedral.  The term ‘Gothic’ in relation to architecture is associated with light, due to a number of influential structural and stylistic features, namely, pointed arches, ribbed vaults and flying buttresses which stabilised the structure.  These lessened the need for masonry walls and enabled the insertion of large, stained glass windows.

The 12th century was a time of spiritual and intellectual restlessness that inevitably led to a manner of architectural expression giving physical form to the seminal ideas of the era.  The solid, secure, self-assured Romanesque architecture that had served the Church so well in the preceding centuries could not adequately hold the imagination of new church builders.

It began in 1144 with Abbot Suger’s re-building of the sanctuary of the abbey church of St Denis, Paris, the most important church in France at the time.  The round arch of the Romanesque was abandoned for the pointed Gothic arch giving greater emphasis to the vertical, and the heavy, solid walls of stone ‘melted’, replaced by diaphanous, coloured glass giving greater expression to the symbolism of light than ever before in Christian architecture.  The structural genius of the pointed arch and the flying buttress allowed these buildings to reach higher and higher, emphasising the transcendent with its verticality and more and more glass able to speak of the Divine light upon which all existence depends.

Gothic has had a significant and lasting impact on the architecture of the Church ever since it emerged in France.  The new style of architecture developed over several centuries, spreading to Britain and across Europe (notable examples include Salisbury Cathedral in England and the Dom in Cologne).  Gothic was attractive to the sensibilities of many church builders and became the prototype for countless churches that followed in the next eight centuries.

Gothic architecture has had periods of revivalism, the most recent in the 19th century England developed at the instigation of Augstus Welby Northmore Pugin (1812-1852).  It was this revival which was most influential in Australia, where some of the finest Gothic revival churches and cathedrals in the world were built in the 19th and early 20th centuries.  One such example is Sacred Heart Cathedral, in the provincial city of Bendigo, Victoria, in the Catholic Diocese of Sandhurst.

Sacred Heart Cathedral is renowned for being one of the last completed gothic cathedrals of the twentieth century.  The cathedral owes its existence to the legendary Rev Dr Henry Backhaus (1811-1882) from Paderborn in Germany, who was the pioneer priest on the Bendigo (Sandhurst) goldfields around 1852.  As a result of his astute business enterprise and skill for acquiring properties to generate rental income for the Church, the Diocese of Sandhurst accumulated substantial wealth which assisted various building projects in the diocese.  One of Backhaus’ sincerest wishes was to build a cathedral on the present site, land that he purchased in 1855, a sharply elevated location off High Street close to the city centre.  The cathedral structure can be identified from many local vantage points due to the prominent central spire that soars some 87 metres above ground level.

The original construction stage comprising the cathedral’s west end and nave began in 1896 and was overseen by architect William B Tappin (1854-1905) from the Melbourne firm Reed, Barnes and Tappin.  This stage was completed in 1901.  The second stage, comprising the addition of transepts, side chapels, sanctuary, apse and central spire took place between 1953 and 1977, under the architectural direction of Bates, Smart and McCutcheon (successor to Reed, Barnes and Tappin).

At Sacred Heart Cathedral, the afternoon sun illuminates the stained glass window at the west end and provides viewers on the marble floor level with inspiring images of the divine patron of the cathedral and other saintly figures.  It features images of the Holy Spirit (top), Sacred Heart of Jesus (centre), St Augustine and the Blessed Virgin Mary (left), St Joseph and St Patrick (right).  It was designed by John Hardman & Co (1838-2008) of Birmingham, UK, and installed around 1900.  John Hardman was one of the pioneers of the stained glass revival of the nineteenth century.  Starting out as an ecclesiastical metal works, the business expanded into stained glass production in 1845.  Pugin designed for the firm until his death in 1852, when this role passed to Hardman’s nephew and Pugin’s son-in-law, John Hardman Powell.  John Hardman was a Roman Catholic, and his association with Pugin assured their popularity among Catholic patrons well into the twentieth century.  The work of this long-lived firm is extremely highly regarded. 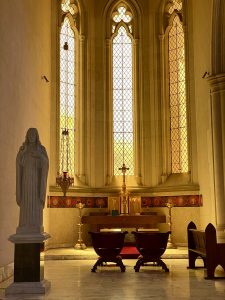 Bendigo’s great west window sits in marked contrast to the remainder of the glass in the cathedral, which was provided by W D Mason Glass of Bendigo (est. 1894).  Significantly, there is no other stained glass in the cathedral.  Whereas stained glass contains pictures or images that are painted (or stained) on to the glass before firing in a kiln, the less expensive leadlight windows (also frequently found in domestic settings) are plain.  They almost always employ the use of ‘quarries’, that is, pieces of glass that are cut into regular geometric shapes.  These shapes are sometimes square, sometimes rectangular or circular, but most frequently diamond in shape, which creates a ‘diaper’ pattern.

These leadlight windows have been left either clear (at the clerestory level along the upper nave, transept and sanctuary) or tinted in a gold colour (the lancet windows in the Blessed Sacrament Chapel, Lady Chapel and Sanctuary) or tinted in a combination of light green, beige and pink leadlight along the original 19th century nave walls.  These latter colours sit well in relation to the interior sandstone walls. 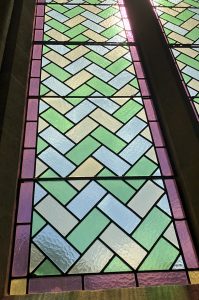 The clear leadlight windows at Sacred Heart allow natural light to permeate and illuminate the interior of the cathedral.  The experience is enhanced by the reflection off the white and grey marble flooring (Calacatta Vagli extra marble from Italy) and the light sandstone and limestone walls of nave, sanctuary and side chapels (quarried respectively from Barrabool Hills and Ceres near Geelong or Mount Gambier in SA).  Artificial lighting for evening and night-time liturgies is currently provided by high-level sodium flood lights which highlight the timber hammerbeam ceiling, with additional quartz iodide spotlights that illuminate the altar.  (It is envisaged that the interior lighting will be replaced sometime in 2022, as the present approach is considered no longer effective, safely serviceable or energy efficient).

The generous inflow of natural light into this liturgical space reminds those present of God, the original source and creator of all light, of his risen Son, Jesus Christ, who is the spiritual light of the world, and of the Holy Spirit who illuminates the Church and the hearts and minds of all who seek God through personal and communal prayer.  The experience of this natural light is quite different from the ‘miraculous’ light of medieval Gothic cathedrals; here the windows acted as huge multi-coloured filters that changed the quality of ordinary daylight, endowing it with the poetic and symbolic values so highly praised by Abbot Suger (Janson, History of Art, 1986).  Something of that quality can be experienced through the great west window, but it cannot work alone to transform the luminosity of the entire interior. 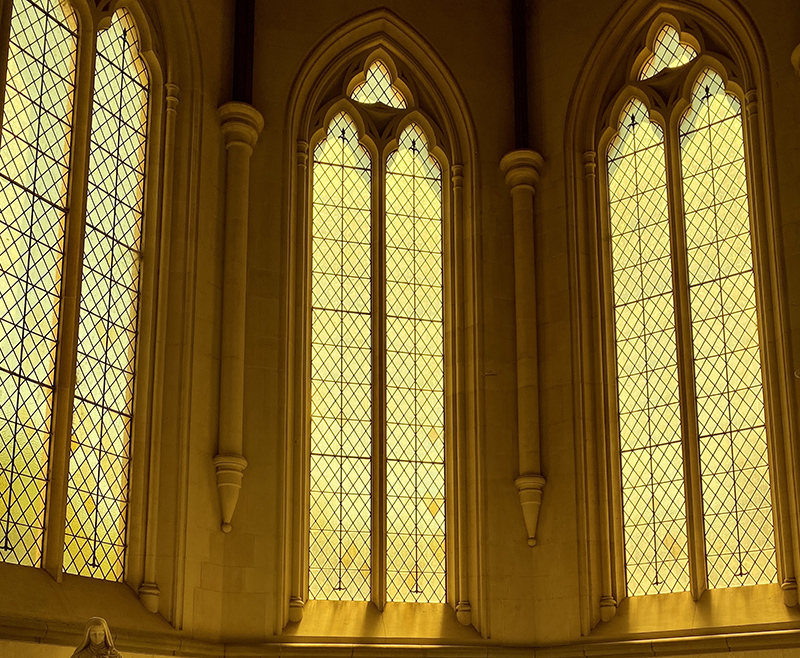 In the nineteenth century, the architect of the cathedrals in Melbourne and Sydney William Wardell corresponded with Hardmans about the quality of light in Australia and the impact it had on the stained glass being shipped from England.  Adjustments had to be made to allow for the extra brightness.  No such adjustment has been made in Bendigo by W D Mason Glass.  Generally, natural light works brilliantly during the day in Sacred Heart Cathedral, across the four seasons of the year, helping worshippers to see and participate in the liturgical celebrations.  However, during winter, those standing in the nave facing east towards the altar and ambo almost require a pair of sunglasses, such is the power of the rising sun streaming through the sanctuary windows!  Some would argue that the quality of ‘other-worldliness’, so treasured in medieval Gothic, has been lost. 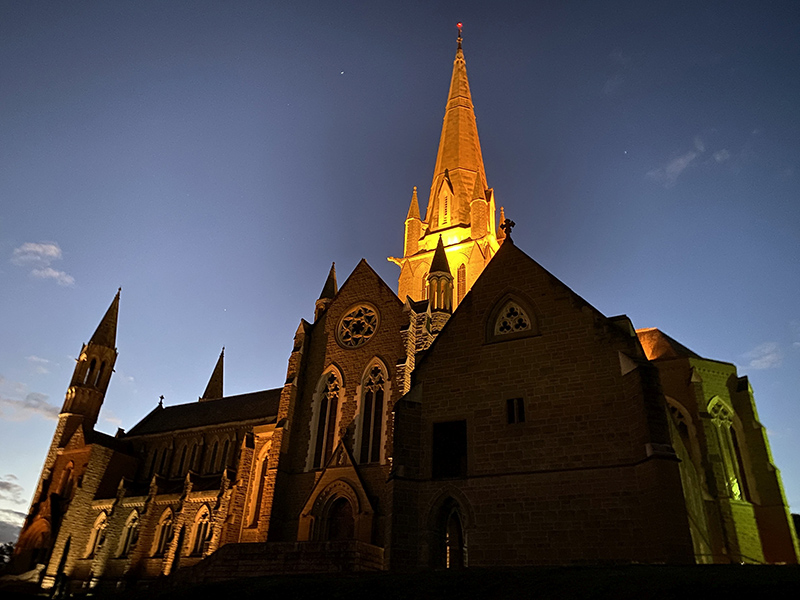 At night, Sacred Heart Cathedral is flood-lit giving further witness the power of light.  Christians are exhorted to be a light for the world (Matt 5:14-16), a theological theme that was also emphasised by Vatican Council II (Lumen Gentium 1).  Thus the sandstone structure of the cathedral forms an inspiring light at night time, pointing to the victorious cross of Christ that triumphs over darkness.  This lies at the core of our Christian faith and the liturgy.  Christians who form the living stones of Christ’s body are called to radiate Christ’s light and love for others, not through hearts of stone but rather through hearts of flesh and lives illumined by the Gospel.

Dr Paul Taylor is Executive Secretary for the Bishops Commission for Liturgy of the Australian Catholic Bishops Conference.