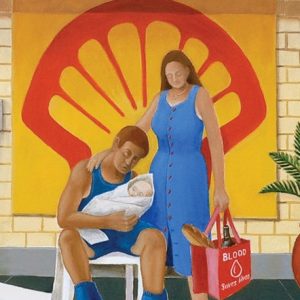 The Religious Art of Jan Hynes

Jan Hynes is a contemporary artist living and working in Townsville, Queensland.  She has painted many gospel stories in bright modern colours setting them in Townsville: in the Visitation, Mary and Elizabeth meet over coffee and mudcake; the Nativity is set, not in a stable, but in a service station with Joseph shown as a tradie and Mary carrying the shopping (see detail, left); she shows the adoration of the Magi on the Strand with Jesus being pushed in a stroller.  Rooted in the local, Hynes situates the bible scenes in her neighbourhood on the coast of Queensland.  Images of local plants, birds, and views of Magnetic Island establish a distinctively Australian context for us to rethink the gospel narrative.

The Death of the Virgin 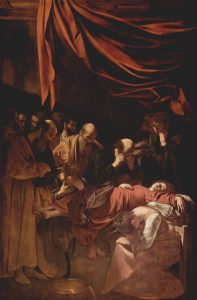 But let us look first to the art of the Italian Renaissance, in particular, at Caravaggio’s The Death of the Virgin.  Now in Paris at the Louvre, the painting was created for an altar in the church of S. Maria della Scala in Rome in the years 1601-1602.  Here Caravaggio probes the raw grief of the apostles gathered around the Virgin Mary on her deathbed.  Today as we view this compelling painting, our gaze lingers lovingly on the body of the Virgin.

But 420 years ago, shock at the painting’s lack of decorum impelled the Carmelites to refuse to accept the painting for their church.

Its earthy realism, exemplified by Mary’s bare feet, reminds us that the mother of God had ached, suffered and bled as all human beings do, and did so to the end.  Her physical presence buttresses our faith that flesh can be transfigured and redeemed.  It shows us in a fresh way the reality of the incarnation, which is the story of the sacred revealed in our world.  For Caravaggio’s time, it was a step too far.

The Annunciation in Townsville

For her painting of the Annunciation, Hynes supplies a provocative title: The Annunciation in Townsville: It’s Come Back Positive.  This phrase from today’s medical jargon signals our contemporary domestic world in which the biblical story unfolds.  To be sure, Mary appears dressed in her traditional blue, but she reclines in a squatters chair and again has bare feet.  Her generous, curvaceous body reveals her pregnancy.  The architectural features of her home situate the biblical story in a world remote from first-century Palestine, but one which is alarmingly familiar to us: the tin roof and veranda, the Hills hoist and the picket fence, a garden hose and the very prominent Ibis. 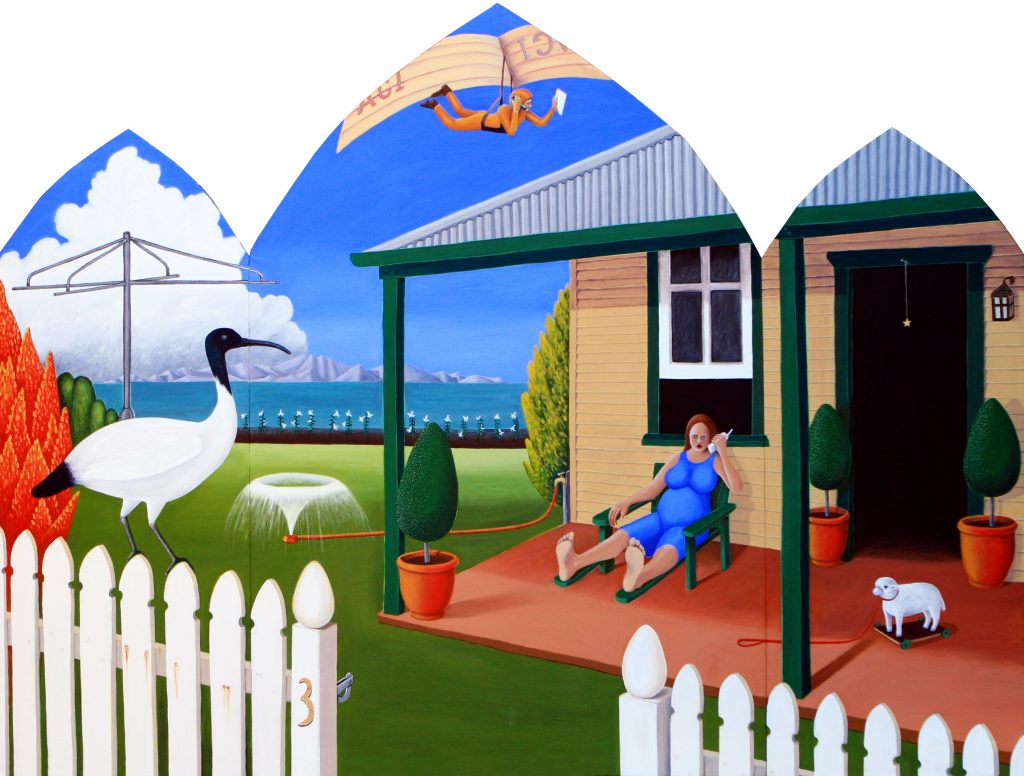 Hynes subverts and adapts traditional symbols of Marian iconography and she contrives to discern off-beat meanings in these refashioned symbols and metaphors.  Inclusions like a child’s lamb-on-wheels, and the tiny star hanging over the front door expand the symbolic repertoire with references to the forthcoming Christ child.  Hynes employs an Australian setting in order to redeploy familiar symbols from the Western visual tradition of Annunciation scenes.

Thus centuries-old symbols are made to interact with the most improbable contemporary equivalents.  Hynes challenges the viewer to find meaning in this de-familiarising portrayal of Mary.  How effectively does Hynes’ reframing of the Annunciation story persuade the viewer to accept a different vision of the presence of the divine?  How well does it reveal new dimensions of the sacred in our own time and place?

My experience of teaching this painting to both undergraduate and graduate theology students has confirmed her success.  In the classroom most students welcome the substitution of colloquial, domestic features for the traditional iconography.  But students respond to Hynes’ Annunciation with both positive and negative reactions that generally divide by gender.

Often women express delight at seeing Mary depicted in a state of exhaustion with swollen ankles.  No longer does her bodily image evoke a perfect and indeed unattainable model for women.  Mary’s pendulous breasts and rounded belly evoke especially for women the physicality of pregnancy.  But other students, typically young men, disapprove of the everyday suburban ordinariness of the setting, exclaiming, ‘But the Annunciation doesn’t look like this!’  Often further discussion pinpoints specifically what features discomfort these men.  Above all it is the fleshly, almost casual, depiction of Mary.

Women students agree that Hynes’s depiction departs from the idealised beauty of so many Renaissance Madonnas.  But in contrast, these women rejoice at how inspiring they find it to gaze upon a Mary, who reclaims the fecundity, indeed the fleshiness, of her body as a site of divine encounter.  As early as the fourth century, the great Church father Gregory of Nazianzus employed the words the subtlety of God and the density of flesh to characterise the paradox of incarnation.  This is the scandal that Jan Hynes has dramatised, namely, the fragility of the woman’s body where human life and the promise of redemption meet.  As we have seen from Caravaggio, the challenge is not new, but every succeeding generation has to engage with it anew in order to realise that God is present in the here and now, reaching out to save us.  The present reality transcends the historical event.