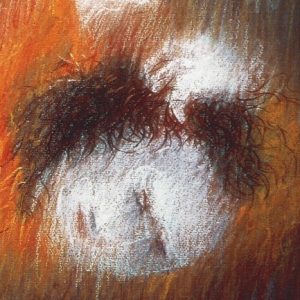 Arthur Boyd’s wife, Yvonne, commented that Arthur was very fond of Saint Francis.  This was undoubtedly true and yet in his perceptive and idiosyncratic way our artist turns the medieval legend on its head.  The saint’s values of human brotherhood, non-materialism and engagement with nature are preserved, while the proselytising and, in Boyd’s eyes, control over others is sternly rejected.  The medieval Francis felt himself to be divinely inspired while Boyd in the 20th century was alone with his fragile yet dogged sense of his own humanity.

Until 1959 when his father Merric Boyd died, Arthur had painted mainly Australian themes with local landscapes.  His Bride series and Biblical paintings had shown his developing interest in moral and mythical subjects.  Arthur, Yvonne and their children arrived in London that same year where a strong friendship developed with the medieval specialist Tom Boase.  Both men shared an interest in Saint Francis and, since Boase’s print run of a biography of the saint had been destroyed in a warehouse fire in 1936, a collaboration was struck.  Yvonne proudly told me that it was Arthur’s idea.  The book text would be revised and Arthur would supply twenty illustrations.  It was 1964.  He immediately set about producing a series of large coloured pastel drawings each measuring 48.3 x 63.5 cm.  The results could not be more radical; they contrast dramatically with previous traditional renderings from Giotto in the trecento to those of the 20th century such as the work by the Australian, Roger Kemp.  Gone is any reference to the beautiful Italian countryside, a monk’s habit or Francis’s beloved birds or befriended wolf.  The viewer is immediately plunged into the heart of human drama.  Three examples will suffice to demonstrate Boyd’s method. 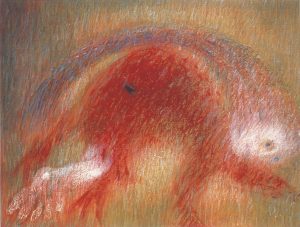 The work entitled The Wolf of Gubbio with St Francis (48 x 65 cm) is highly abstracted and simplified.  The curved supplicatory body of Saint Francis arches over the brilliant red, shaggy coat of the wolf.  The forms occupy the majority of the pictorial space.  The green vegetative flecking in the bent form of the saint demonstrates the artist’s use of the doubling of forms with their symbolic overtones.  Reference to a curved tree is made as this work had an earlier alternative title St Francis in a Bent Tree.  The tree as phallus and representing the tree of knowledge reflect earlier symbolic associations made by the artist.  The tree ends with the white, ethereal mask-like face of Saint Francis with his dreamy celestial blue eyes gazing downward.  The wolf’s large black sinister eye, possibly doubling as a human navel, looks menacingly at the white leg which the wolf appears to be engorging.  The doubling of this white limb as the leg of Francis is repeated in the red rear legs of the wolf which serve as the arms of the saint.  This compositional device results in the wolf and the saint seeming to be interlocked in an intense struggle in which both are vulnerable and interdependent.  The wolf’s primitive front paws claw the ground while large drops of bright red blood drip from his mouth.  The red colour, which conveys the danger of the brute force of the beast, contrasts dramatically with the white transubstantial quality of the saint’s face.

Boyd’s break with the traditional rendering of an authoritative, earth-bound Francis shaking the wolf’s paw and so pacifying him could not be more radical.  The residents of Gubbio, usually portrayed as acting as witness to the event, are noticeably absent.  In Boyd’s rendering the saint and wolf are locked in a timeless, fixed state of combat.  The fact that by an unnatural act of great will Francis has transcended his sexual and animal nature results in mutual abasement.  This rendering becomes a single great metaphorical image in which the essential condition of man is portrayed as one of struggle with conflicting qualities of instinct, mind and soul. 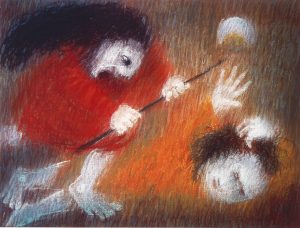 In Boyd’s St Francis being Beaten by his Father we again are confronted with a rarely portrayed aspect of the saint’s early life.  There is only one example of this theme of which I am aware and that is in the little parochial church of San Damiano in lower Assisi.  The father having realised his son’s intention to follow God, imprisons Francis and beats him.  In Boyd’s rendering, the brilliant red authoritative figure of the father lurches forward in rage almost trampling the victimised son underfoot.  The father’s dense streaming hair appears as smoke from a raging fire.  The cane divides the picture horizontally in two symbolising an irrevocable division between father and son.  The pecuniary interests of the father are symbolised by the gold glistening above in the arched window.  How totally different is this image from that of the well-known Giotto in the Basilica where Francis is the protagonist, removing his clothes and returning them to his father?  In this latter rendering, the courtly crowd stand witness to Francis’s erstwhile decision to adopt God as his only father. 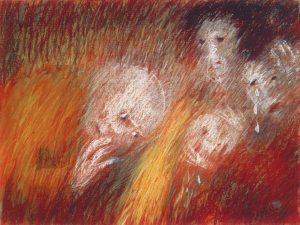 The last pastel to be discussed is equally original as those discussed above and considers the involvement of women.  In the pastel of St Clare Showing her Shaven Head to her Family, the repercussions of Saint Francis’s stand are considered.  This is a heart rending image in which Clare’s now shaven head is central to the composition; she bends over as if prematurely aged.  Her cut, chaff-like golden hair creates a pictorial division.  The three family members throw up their hands and weep at what they realise is a disintegration of their family.  Clare’s sister Agnes and later her mother left their home and joined the order of the Poor Clares who were lodged at San Damiano.  The viewer can not but empathise with the chain of events in which Clare now rejects her father as Francis had done.  The biblical theme of the Return of the Prodigal Son was dear to Boyd, as were family ties, and he portrayed it in many of his works.  But for Francis and Clare there could be no return.

It has been shown from these examples that Arthur has chosen rare and previously unconsidered aspects of Francis’s path to sainthood.  Boyd’s saint has a dark side with its implied violence.  The question is posed: ‘Was Francis a hero or anti-hero?’  Divine involvement is absent, as is the medieval Italian setting.  Boyd’s Francis does not talk to the birds, rather he is involved in the human psychological drama of sacrifice for the supposed good of humanity.

Walter Neurath of Thames and Hudson rejected the idea of publishing the pastels with the biography on the basis that the colour illustrations would be too costly to produce.  It is indicative of Boyd’s creative energy and prolific output that he produced the pastels before a definitive contract for their publication had been specified.  The publisher was prepared to print Boyd’s Saint Francis series but in black and white.  Aware that the pastels would not have reproduced well in black and white, Boyd in 1965 produced a set of twenty one lithographs with a plate size of 51 x 63cm.  These were based on the subjects and general design of the pastels but due to the medium have a strong linear quality.  The pastels were sent back to Melbourne and were sold by the Australian Galleries.  The multiple copies (a total of 525) of the extremely high quality lithographs were later exhibited at the Hungry Horse Gallery in Sydney.  Boyd’s Saint Francis works created quite an impact in the Australian art world.  They and the book did not sell particularly well and Yvonne shrewdly commented to me, ‘They were a bit irregular!’

Boyd never relinquished his total vision of the Saint Francis series in colour.  When John Olsen was venturing into artwork translated into tapestry, Boyd became motivated to produce a monumental Saint Francis series.  In 1969, Boyd placed an order with the Manufactura Tapecarias de Portalegre in Portugal for twenty tapestries measuring 2.5 x 3.5 metres.  Thus Arthur’s Saint Francis series exists in three diverse mediums, and along with sketches, his Saint Francis works number over six hundred.  Although the theme of Saint Francis occupied an active three-year period of the artist’s life, his interest in the saint and his ideals and the challenge of Franciscanism impinged on Arthur’s imagination for the rest of his life. 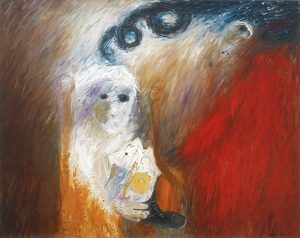 Boyd often took mythological and legendary themes into his personal realm and his painting St Francis with Potter Holding a Butterfly of 1965 is such a painting (the word ‘Potter’ was only added to the title by the artist in 1998, thus providing a clue to the subject).  The red wolf like figure with the smoky black spiral of hair seems to issue from the potter’s head, while the white ethereal figure sits docilely on a throne and is clasping a butterfly.  The seated figure is identifiable as Boyd’s father Merric with his characteristic heavy black boot.  The red wolf like figure shares similarities with Boyd’s authoritarian portrayal of Francis’s father and Masseo one of his followers who inflicted control over a co-brother.  This painting was the last of the Francis related works.  The painting came several years after the death of Merric and appears to be a cathartic putting-to-rest of Arthur’s troubled memory of his father.  The authoritarian, difficult father has now rid himself of his dark aggressive qualities and has reached a condition, almost saintly, of humility and transcendence.  He holds a skate (fish) which was always a symbol for Boyd of the low lying dark qualities of life.  Superimposed on this there emerges a butterfly.  The doting son has released the soul of a prodigal father.

Arthur was not formally religious but his life could be called saintly.  He shared a vision of universal ‘brotherhood’ with Francis.  He felt that the answers could be found in a non-materialistic environment where nature abounds.  He believed in the redemptive possibilities of the creative imagination.  It was with these thoughts and convictions in mind that Arthur, with the total support of his equally committed wife Yvonne, bequeathed the artist’s hub of Bundanon to the Australian people.  The attached building of Riversdale with its surrounding wilderness has already inspired several generations of schoolchildren.

Arthur Boyd’s example shows us how one imaginative and generous man can make a soulful difference to our evolving culture.

Margaret Pont, research fellow in the University of Melbourne’s School of Art History, Cinema, Classics, and Archaeology, lives in Melbourne and Assisi.

Arthur Boyd’s work reproduced with the permission of Bundanon (17 November 2021).