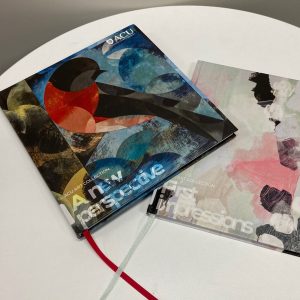 The art collection at ACU is among the most important collections of art in Catholic hands in Australia.  It comprises over 1000 diverse works dating from the early medieval period to the present day and covers both religious and non-religious subjects, both indigenous and non-indigenous works.  The art graces communal and public spaces over the eight campuses of the university.

The biggest part of the collection is Modern and Contemporary Art; the remainder is subdivided into sections called Chapel, Historical and Ceremonial.  The first of these includes the liturgical arts of vessels and vesture, tabernacles and stations of the cross.  The historical includes botanical specimens, textiles and furniture, and a collection of works by colonial artist Conrad Martens.  The last includes items and robes used for official occasions such as graduations. 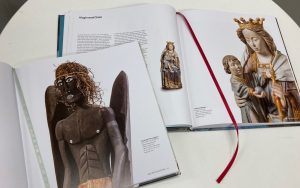 Since her appointment as the inaugural art curator in 2016, Caroline Field has done the herculean task of identifying, assessing, cataloguing, and documenting the scattered works owned by the university.  She has brought admirable order and new meaning to the collection.  The significant number of religious works remind staff and students of their Catholic identity.  But all the works offer insight into beauty and the human search for wisdom which fits so perfectly into the ethos of the university.

Now she presents two lavish hard covered books offering perspectives on the university art collection.  Different works are selected and described by a wide range of authors.  The first volume, First Impressions, addresses indigenous works.  Collecting this art is a major part of the university’s commitment to inclusion and is a way of recognising and celebrating the culture of First Peoples.  The book illustrates over fifty works, covering painting, printmaking and sculpture.  Several have Christian subjects, notably the large painting (100×140 cm) by Shirley Purdy, When Ngaboony Came Down (2015) and the sculpture by Guykuda Mununggurr, Yolngu Angel (2015) which stands over 1.5 metres tall. 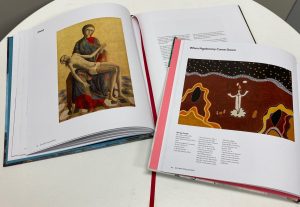 The second of Field’s two books, A New Perspective, contains over sixty full-page reproductions, most of the works accompanied by a commentary.  The texts offer insight into the artist and the artistic and historical background to the work, which lead in turn to a new appreciation of the meaning of the art. 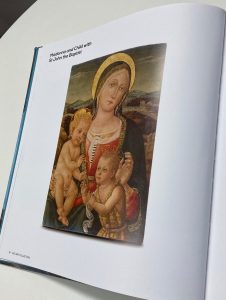 The ACU collection includes an extraordinary group of medieval madonnas and Christ figures (catalogued in both the chapel and historical subsections).  Beginning with a figure of Christ in enamel from Limoges (13th century) and a meter-tall Flemish Virgin and Child carved from polychromed oak (14th century), there are five works from the 15th century (four madonnas and a crucifix figure) in panel painting, sculpture and glass.  These are followed by four pieces from the 16th century, two from the 17th and several from the 18th century. 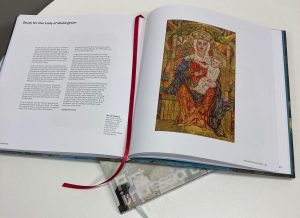 The contemporary religious work is just as stunning – two major works by Justin O’Brien (a Pieta from the 1960s and a Visitation from 1975) and a ceramic tile by Arthur Boyd depicting The Tribute Money (1950-2) are highlights.  There are also works by Philip Cooper, Leopoldine Mimovich, John Coburn, Roy de Maistre and many others.

For those who want to see more of the scope of the art collection, the illustrated catalogue is available online at ehive.com (search for Australian Catholic University art collection); but these two published volumes are sufficient and eloquent testimony to what Caroline Field has achieved so far in her tenure as curator.