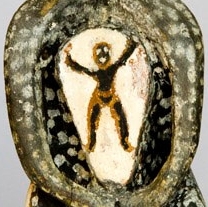 This figure of the pregnant Mary, carved and painted by George Mung Mung (c1920–1991), is a significant work of Christian art and devotion that reflects the merging of Catholic and Aboriginal communities and systems of belief in Australia.

The artist, George Mung Mung, was an Aboriginal cultural leader, distinguished artist and teacher of the Warmun community (Turkey Creek) in Western Australia.  For a number of years, Mung Mung worked as a stockman on cattle stations in the East Kimberley region.  His father’s name was Yalanga and he also belonged to Kurlungurru country in the Kimberley.  Yalanga was employed as a tracker for the police in what was then called Turkey Creek.

George Mung Mung combined his skills as a painter – mostly featuring the landscapes and cultural life of his people – with his abilities as a wood carver.  He would use the local ochres and source the wood for his sculptures from trees deep in the Bungle Bungle Range of Western Australia.

Australian art historian, Rosemary Crumlin rsm recounts how the sculpture of the pregnant Mary came about.1  One day, as a small group was praying in the church, the dogs knocked over the plaster statue of the Virgin and it broke.  ‘I’ll make you a Mary that will never break,’ George promised.  And he set off to find a piece of wood that would live on and not be subject to decay; his desire harmonises in some ways with Catholic belief that, at the conclusion of her earthly life, Mary the Mother of Jesus was assumed body and soul into heavenly glory.

The sculpture conveys a strong sense of artistic and religious conviction, contextualised in the local community.  Mung Mung combined his reverence for his own Aboriginal heritage, its rich spirit world, and deep connection with the land and community with his strong Catholic devotion to Mary the Mother of Jesus, and God’s only Son.  His comments on the sculpture carry great poignancy:

This young woman she’s a young woman, this one.  The spirit of the little baby comes in a dream to his mother.  Proper little one, his mother says.  The babe grows and he might be ready at Christmas time.  He says, Mother, I’m ready now.  And the old woman take her away and the little one is born down in the river here.2

In the words of Rosemary Crumlin:

This Mary epitomises the deep ‘two-way’ spirituality of the Warmun Community at this time.  She is a young woman, painted with the body paint patterns reserved for young, unmarried Warmun girls.  Her womb is like a shield under the heart.  Her unborn man-child dances.  He is the One.  She is the Mother.  Together they remind the beholder that Mary and Jesus are the centre of this faithful little group.3

The sculpture’s religious and artistic significance has been recognised internationally.  American Benedictine, Kevin Seasoltz, takes up Rosemary’s words and notes, Mung Mung’s image is undoubtedly one of the greatest images of Mary and her child produced in the last century.4 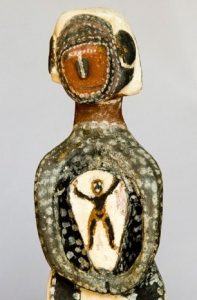 It seems the fragile white ochre has been repainted over the years.

In 1990, Mung Mung was awarded the National Aboriginal and Torres Strait Islander Art Award and, a few years later, the work was included in the Australian edition of the Catechism of the Catholic Church.  Between 1989 and 2006, other art works by George Mung Mung were featured at the National Gallery of Victoria, the Art Gallery of New South Wales and the Museum and Art Gallery of the Northern Territory.   George’s legacy is continued by his son Patrick who works at the Warmun Art Centre.

Dr Paul Taylor is Executive Secretary for the Bishops Commission for Liturgy of the Australian Catholic Bishops Conference.